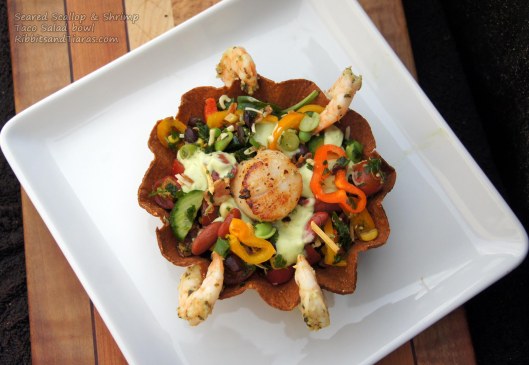 Today’s post for the A to Z Challenge is a Seared Scallop and Shrimp Salad Bowl topped with an avocado cilantro lime dressing.  The shrimp were marinated and cooked in lime, garlic and cilantro. You may remember that for the letter D – I posted Dylan’s Crazy Cobb Like Salad. The salad was my son’s creation and he selected the ingredients and chopped his way to making a very yummy salad.  Now, my younger daughter Gabby is a foodie in the making and is very competitive. She has been dreaming up her salad ever since.  I had to stop her at one point because she had some many ingredients on her list that just did’t go to well together. 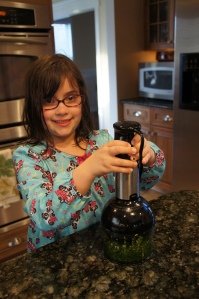 All though she selected all the ingredients for her salad, she doesn’t quite have the knife skills that Dylan has so she assisted with washing vegetables, using the chopper and mixing the ingredients.

Her salad had the following items: (just cut and mix them all together!)

Combine all the ingredients in a bowl and mix until shrimp are covered.  Let sit for 15 to 30 minutes.  When ready to cook heat a stainless steel pan on the stove and pour contents of bowl into pan. Cook until shrimp are pink and opaque. Flip shrimp once. 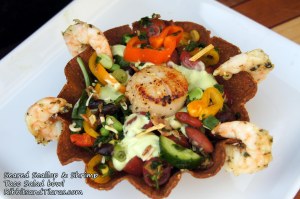 Pat dry each side of each scallop with a paper towel.  Season each side with salt and pepper.  Heat a stainless steel pan on the stove with oil and butter  Let the pan get hot – almost smoking.  Place scallops in pan and cook for 90 second to 2 minutes (depending on size) on each side.  DO NOT MOVE the scallop until you are ready to flip them.  RESIST the URGE!!!! RESIST and you will have perfectly seared Scallops!